Deacon N. W. P. Tharaka Dinindu Perera, CMF was ordained a priest on 18th of May, 2017 by His Lordship Rt. Rev. Dr. Raymond Wickramasinghe, the Bishop of the diocese of Galle. The ordination ceremony was held at St. Joseph´s church, Wennappuwa in the diocese of Chilaw.
Fr. Tharaka Perera entered St. Claret Seminary on 15th of January, 2002. After completing his school studies entered to the National seminary of Our Lady of Lanka for his Philosophical studies. He entered to the Philippines Novitiate in September, 2009 and made his first profession in October, 2010. Later, he completed his Theology at the National seminary and made his final profession on 8th of September, 2016. 8th of December of the same year he was ordained a deacon and served at St. Francis Xavier´s church, Nuwara Eliya. May he enjoy meaningfully the priestly life for the rest of his life by being a real servant of Christ in the footstep of Fr. Anthony Mary Claret. 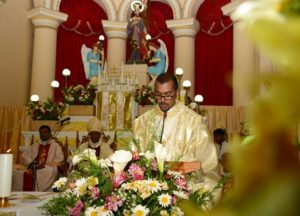